The Beginning: The “Roots” of the Kunta Kinte-Alex Haley Foundation 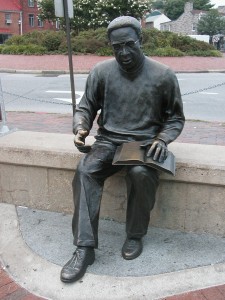 Alex Haley first learned of his African ancestor, Kunta Kinte, while living with his maternal grandparents in Henning, Tennessee. According to family history, Kunta Kinte landed with others who were enslaved in “Naplis.”

After years of research, Alex’s quest to uncover his family history led him to Annapolis, Maryland, where it is believed that the African, Kunta Kinte, a Gambian, arrived aboard the cargo ship Lord Ligonier on September 29, 1767.   Kunta Kinte and many of his descendants spent their lives in slavery. But the indomitable spirit of Alex Haley’s ancestors and their strong sense of family helped them survive slavery and its aftermath.

Alex began telling his story at a time of great racial tension. His mission was to infuse pride in his people, many of whom knew only that their ancestors had been enslaved.

The resulting book Roots and the television mini-series struck a responsive chord with millions of people around the world. By the end of the 1977 mini-series broadcast, three out of every four American households with televisions were tuned into the program.  The book, Roots, published three years prior to the series in a condensed version by Reader’s Digest, won the Pulitzer Prize and the National Book award. Since then, the book has been published in 37 languages.

Alex Haley died unexpectedly in 1992, but the international story of Kunta Kinte and Roots lives on.

The farthest-back person they ever talked about was a man they called the African.

Though we are of different tribes and tongues, remember we are the same people!

We all suffer.
If a man’s wise, he learns from it.

This site uses cookies. By continuing to browse the site, you are agreeing to our use of cookies.

We may request cookies to be set on your device. We use cookies to let us know when you visit our websites, how you interact with us, to enrich your user experience, and to customize your relationship with our website.

Click on the different category headings to find out more. You can also change some of your preferences. Note that blocking some types of cookies may impact your experience on our websites and the services we are able to offer.

These cookies are strictly necessary to provide you with services available through our website and to use some of its features.

Because these cookies are strictly necessary to deliver the website, refuseing them will have impact how our site functions. You always can block or delete cookies by changing your browser settings and force blocking all cookies on this website. But this will always prompt you to accept/refuse cookies when revisiting our site.

We fully respect if you want to refuse cookies but to avoid asking you again and again kindly allow us to store a cookie for that. You are free to opt out any time or opt in for other cookies to get a better experience. If you refuse cookies we will remove all set cookies in our domain.

We provide you with a list of stored cookies on your computer in our domain so you can check what we stored. Due to security reasons we are not able to show or modify cookies from other domains. You can check these in your browser security settings.

We also use different external services like Google Webfonts, Google Maps, and external Video providers. Since these providers may collect personal data like your IP address we allow you to block them here. Please be aware that this might heavily reduce the functionality and appearance of our site. Changes will take effect once you reload the page.