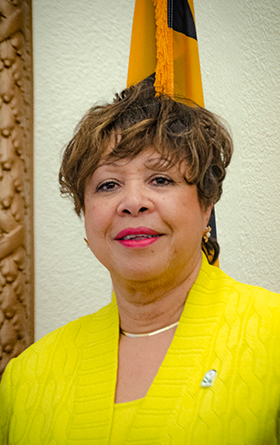 In 2002, Sheila M. Finlayson became the first African American female elected as President of the Teachers Association of Anne Arundel County, Maryland. This organization represents the more than 6,000 teachers who work within the Anne Arundel County Maryland  Public School System. She served in this leadership role for four years, from 2002 – 2006.

Born and raised in Annapolis, she attended Morgan State University, earning a BS in English, and the University of Wisconsin at Milwaukee, earning an MS in Cultural Foundations. She taught English and public speaking in the Anne Arundel County Public Schools for 35 years, before retiring in 2007.  In addition to leading the Teacher’s Association for the County, she served for six years as the East Regional Director for the National Council of Urban Education Associations, representing nine states, advocating for national education issues. Sheila’s professional training also includes membership of the Leadership Anne Arundel Flagship Class of 1998, where she was introduced to policy issues on the local, county, and state levels. Her educational and civic experiences prepared her for policymaking at the local level.

Ms. Finlayson is also an alderwoman on the Annapolis, Maryland City Council.  As a senior member of the City Council, she serves as chairperson of the Rules and City Government Committee and as a member of the Economic Matters and the Finance Committees. She is also the liaison to the Education Commission. In her various roles on the Council, she works very closely with the Annapolis Police Department, the Annapolis Fire Department, and the Office of Emergency Management.

Further, as a Council member, Sheila is known for her active role in serving the community. She developed many initiatives to better serve the community, including Light Up the City for Safety, asking residents to turn on their outdoor lights from dusk until dawn; obtaining contributions of gift cards for residents impacted by the government shut down; and creating the Annapolis Youth Summer Jobs Program, employing hundreds of City youth each year. Most recently, Sheila founded the Annapolis Career Academy, a nonprofit geared toward matching youth with skills-based training and securing permanent jobs in the trade industry.

Currently, Sheila is an education consultant and a recognized public speaker addressing a variety of community, business, and education groups. She is also a trainer and provider of professional development, presenting at numerous conferences and conventions at the local, state, and national levels. Sheila is a trained political organizer, managing numerous campaigns, most notably the campaign for Aris T. Allen.

Ms.  Finlayson is active in various community organizations. She led the group responsible for naming Aris T. Allen Blvd and building the Aris T. Allen Monument.  She served for more than twelve years on the Bates Development Committee which was responsible for the development of Bates Heritage Park. The Bates Legacy Center, the senior center, the Boys and Girls Club, and the housing component have become valued assets in the community. She has served for twenty-eight years as a member of the Annapolis Chapter of The Links, Inc., a community service organization. During which time she has served in many leadership roles within the Chapter, including President, VP, and Secretary, among others. She also served in leadership positions within the Links Eastern Area.

Ms. Finlayson is a member of Mount Zion United Methodist Church in Eastport.

The farthest-back person they ever talked about was a man they called the African.

Though we are of different tribes and tongues, remember we are the same people!

We all suffer.
If a man’s wise, he learns from it.

This site uses cookies. By continuing to browse the site, you are agreeing to our use of cookies.

We may request cookies to be set on your device. We use cookies to let us know when you visit our websites, how you interact with us, to enrich your user experience, and to customize your relationship with our website.

Click on the different category headings to find out more. You can also change some of your preferences. Note that blocking some types of cookies may impact your experience on our websites and the services we are able to offer.

These cookies are strictly necessary to provide you with services available through our website and to use some of its features.

Because these cookies are strictly necessary to deliver the website, refuseing them will have impact how our site functions. You always can block or delete cookies by changing your browser settings and force blocking all cookies on this website. But this will always prompt you to accept/refuse cookies when revisiting our site.

We fully respect if you want to refuse cookies but to avoid asking you again and again kindly allow us to store a cookie for that. You are free to opt out any time or opt in for other cookies to get a better experience. If you refuse cookies we will remove all set cookies in our domain.

We provide you with a list of stored cookies on your computer in our domain so you can check what we stored. Due to security reasons we are not able to show or modify cookies from other domains. You can check these in your browser security settings.

We also use different external services like Google Webfonts, Google Maps, and external Video providers. Since these providers may collect personal data like your IP address we allow you to block them here. Please be aware that this might heavily reduce the functionality and appearance of our site. Changes will take effect once you reload the page.